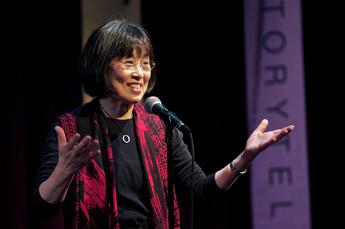 Join the Japanese American Museum of Oregon for this special event with professional storyteller Anne Shimojima as she recounts the moving story of her family’s journey from Japan to Portland, Oregon and through the incarceration camps of World War II.

In 2005 Anne interviewed her 91-year-old aunt about her experiences in an incarceration camp in World War II. From this Anne developed her family story, Hidden Memory; An American Story, which she presents with photos from her family and the National Archives to tell the story of a Japanese American community devastated by war but surviving with perseverance, determination, and incredible strength. Anne’s workshop on family history shows people how to connect with and share their own family stories.

She has a local connection, too–Anne’s grandparents, Shikiye and Seitaro Shimojima, settled in Portland and owned a successful grocery store here, which they lost during WWII. The family was forced to relocate to the Portland temporary detention center before being sent on to Tule Lake.

Anne Shimojima is a third generation Japanese American, born and raised in Chicago, Illinois. An award-winning elementary school library media specialist of 35 years, she first discovered the power of story with her students, using storytelling to enrich and expand the curriculum and develop a deep emotional connection with her listeners. Anne became a professional storyteller in 1982. She taught graduate courses in storytelling for National-Louis University and for eight years served on the board of the Wild Onion Storytelling Festival in Chicago.