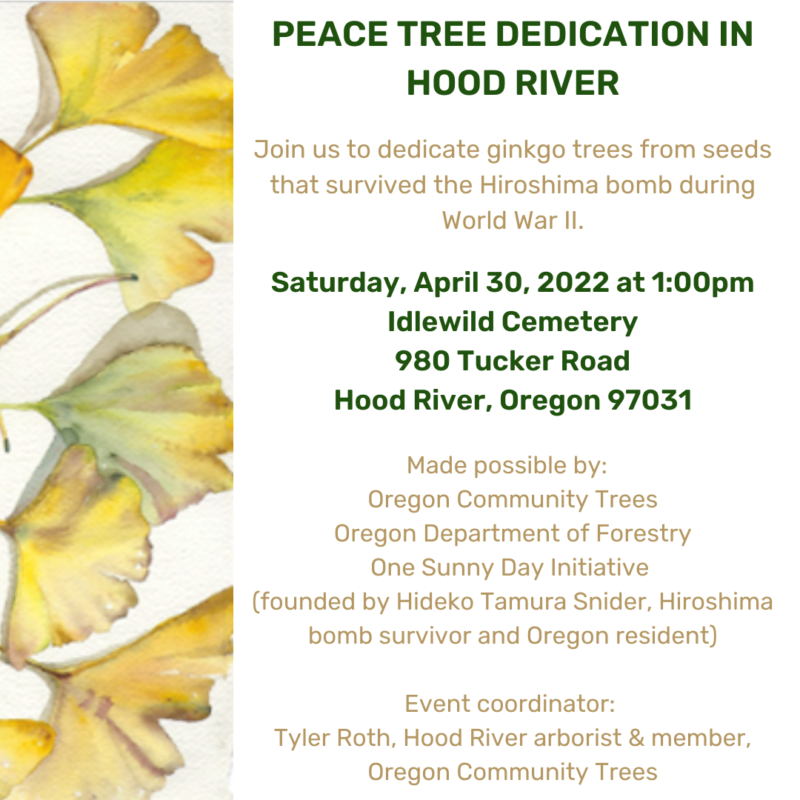 Join us to dedicate ginkgo trees from seeds that survived the Hiroshima bomb during World War II.

About the Hiroshima Peace Trees
Green Legacy Hiroshima was established to care for the hibakujumoku, the trees that survived the atomic bombing of Hiroshima in 1945. Starting in 2011, volunteers collected seeds from these revered trees and prepared to send them around the world as a tool for education and peace. These peace trees are powerful reminders of the resilience of life and the need for peace in a nuclear-armed world; they have been planted in 38 countries so far.

One Sunny Day Initiatives, founded by Oregon resident and Hiroshima bomb survivor Hideko Tamura Snider, partnered with Green Legacy Hiroshima to bring seeds to our area in 2017. These seeds were germinated and cared for by arborist Michael Oxendine, Ph.D., then Landscape Supervisor at Southern Oregon University. OSDI began seeking public homes for over 120 saplings, and later assumed care of the young ginkgos, persimmons, camphors and camellias. Camphors were placed in warmer climates (a few are still available from a partner in Atlanta, Georgia).

In May of 2019, OSDI gratefully partnered with Oregon Community Trees and the Oregon Department of Forestry to continue care and distribution of remaining ginkgos and persimmons in communities throughout Oregon.