Min Yasui Day: Taking a Stand Against Racism and Discrimination 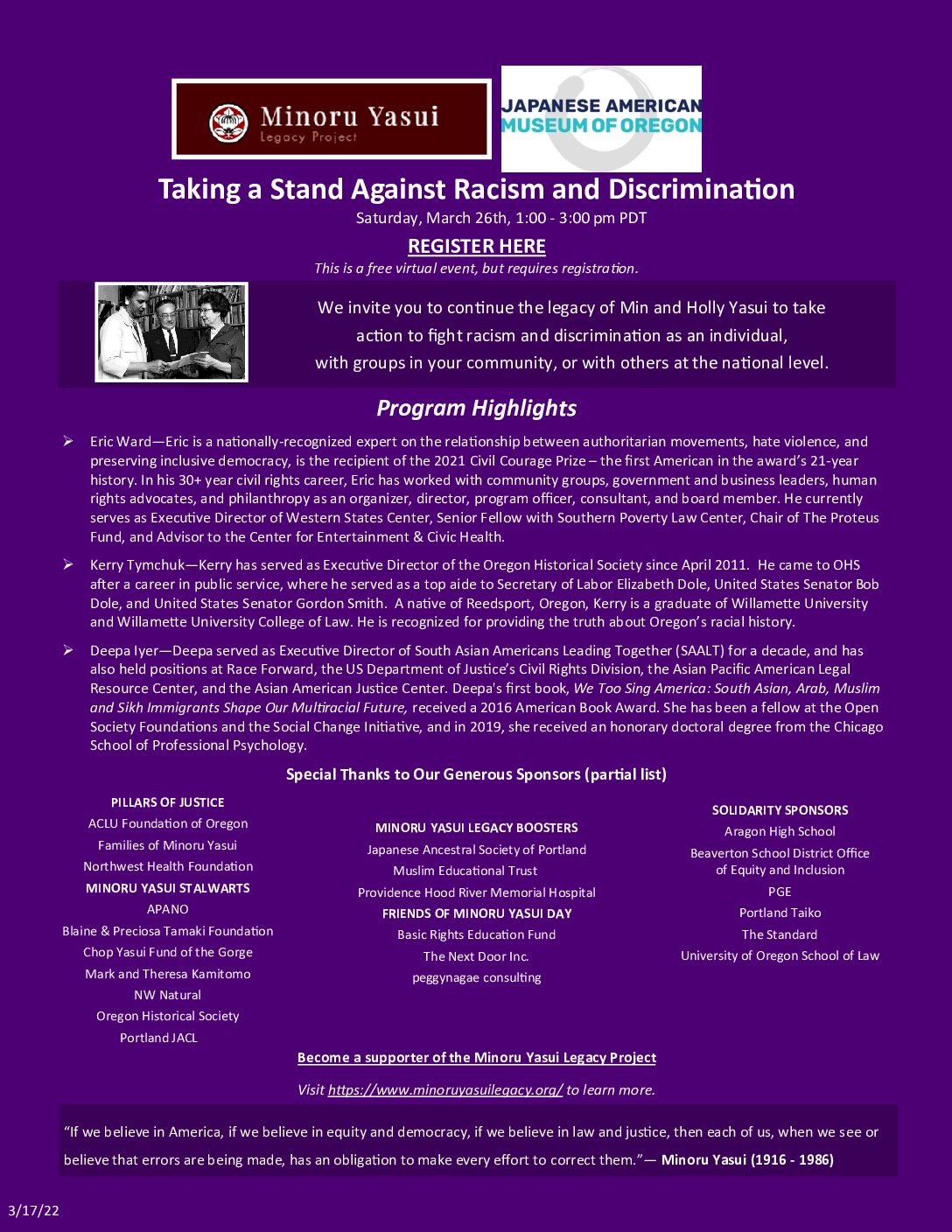 We invite you to continue the legacy of Min and Holly Yasui to take action to fight racism and discrimination as an individual, with groups in your community, or with others at the national level.

Eric Ward—Eric is a nationally-recognized expert on the relationship between authoritarian movements, hate violence, and preserving inclusive democracy, is the recipient of the 2021 Civil Courage Prize – the first American in the award’s 21-year history. In his 30+ year civil rights career, Eric has worked with community groups, government and business leaders, human rights advocates, and philanthropy as an organizer, director, program officer, consultant, and board member. He currently serves as Executive Director of Western States Center, Senior Fellow with Southern Poverty Law Center, Chair of The Proteus Fund, and Advisor to the Center for Entertainment & Civic Health.

Kerry Tymchuck—Kerry has served as Executive Director of the Oregon Historical Society since April 2011. He came to OHS after a career in public service, where he served as a top aide to Secretary of Labor Elizabeth Dole, United States Senator Bob Dole, and United States Senator Gordon Smith. A native of Reedsport, Oregon, Kerry is a graduate of Willamette University and Willamette University College of Law. He is recognized for providing the truth about Oregon’s racial history.

Deepa Iyer—Deepa served as executive director of South Asian Americans Leading Together (SAALT) for a decade, and has also held positions at Race Forward, the US Department of Justice’s Civil Rights Division, the Asian Pacific American Legal Resource Center, and the Asian American Justice Center. Deepa’s first book, We Too Sing America: South Asian, Arab, Muslim and Sikh Immigrants Shape Our Multiracial Future received a 2016 American Book Award. She has been a fellow at the Open Society Foundations and the Social Change Initiative, and in 2019, she received an honorary doctoral degree from the Chicago School of Professional Psychology.

Special Thanks to Our Generous Sponsors:

Become a supporter of the Min Yasui Legacy Project